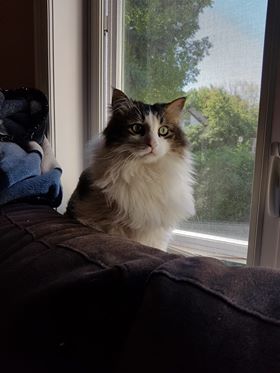 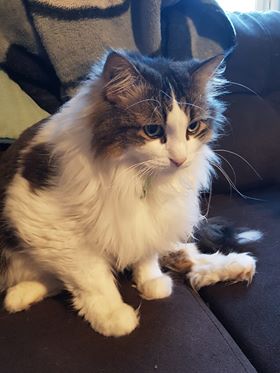 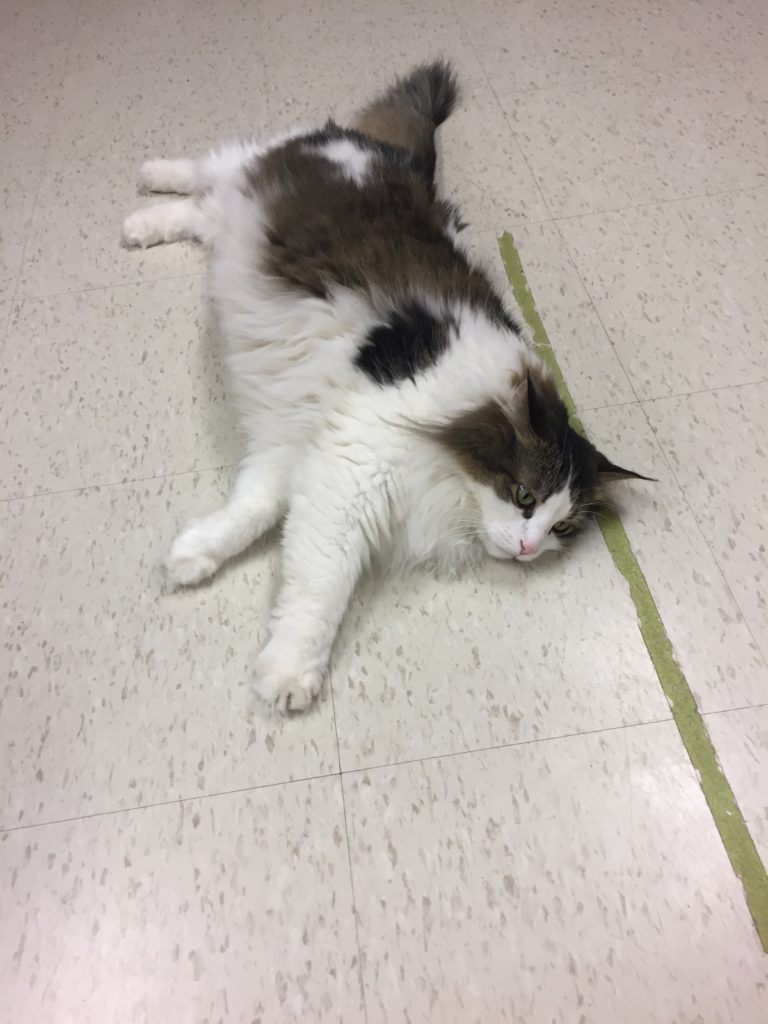 Stan Lee was originally brought to the shelter in 2011, as a stray. He returned a whooping TWICE for various reasons, no fault of his own. This handsome boy finally found his furever home in 2018, with a loving family and two doggie siblings (to everyone’s great surprise!). Almost everyone of our volunteers was sad to see him go. Happy tails, Stan! 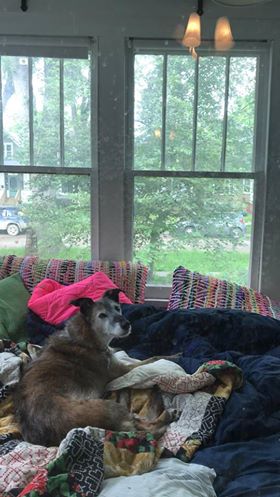 Portia was returned to us (through no fault of her own) when she was TWELVE YEARS OLD. We reached out to find a foster or furever home, this old lady was still kicking and has a few good years ahead of her! After a short week in the shelter, she was sent to a foster home in Winnipeg where she was almost immediately adopted and now has a home (and window ledge) to call her own!

We’re so happy for you, Portia! 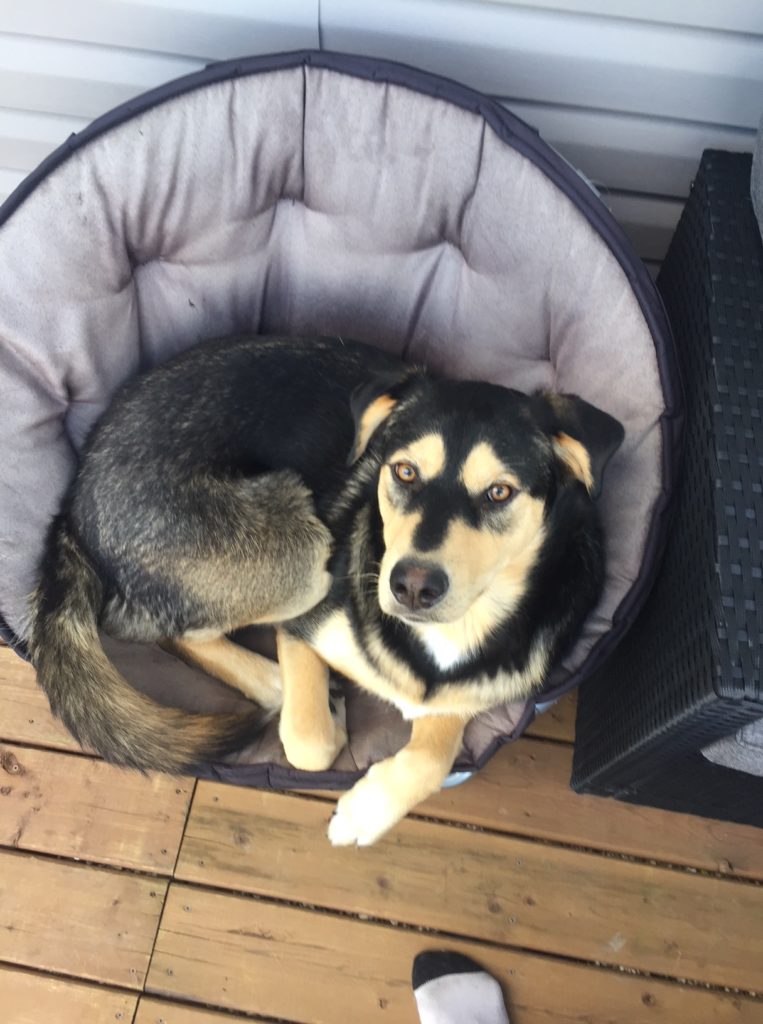 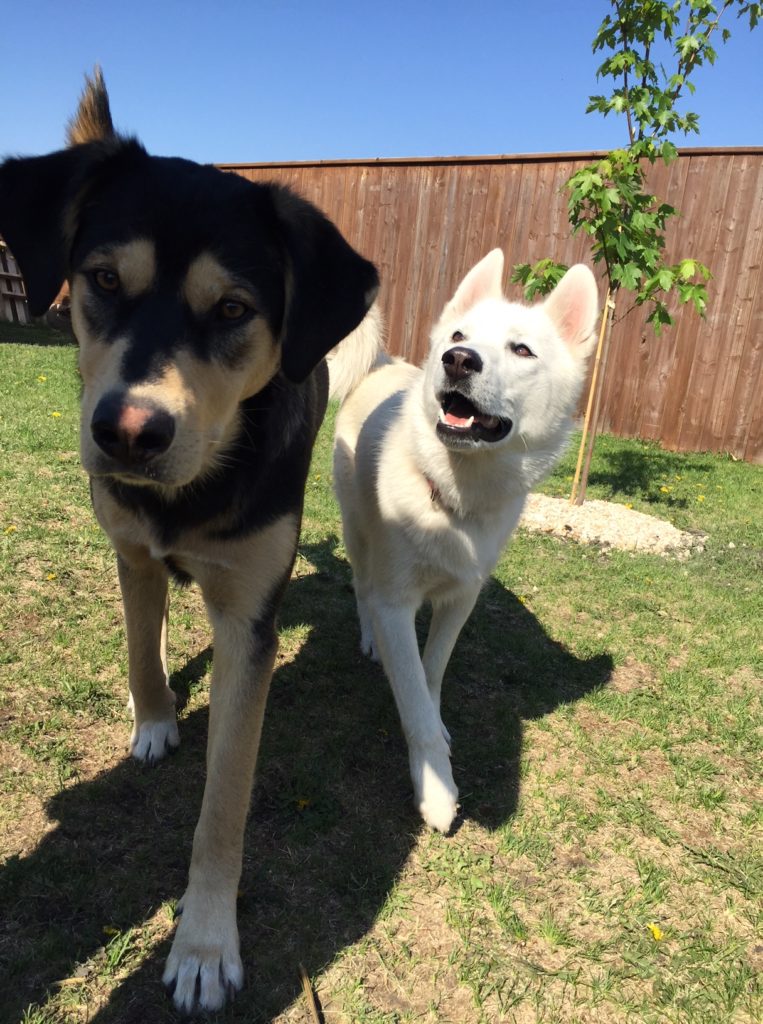 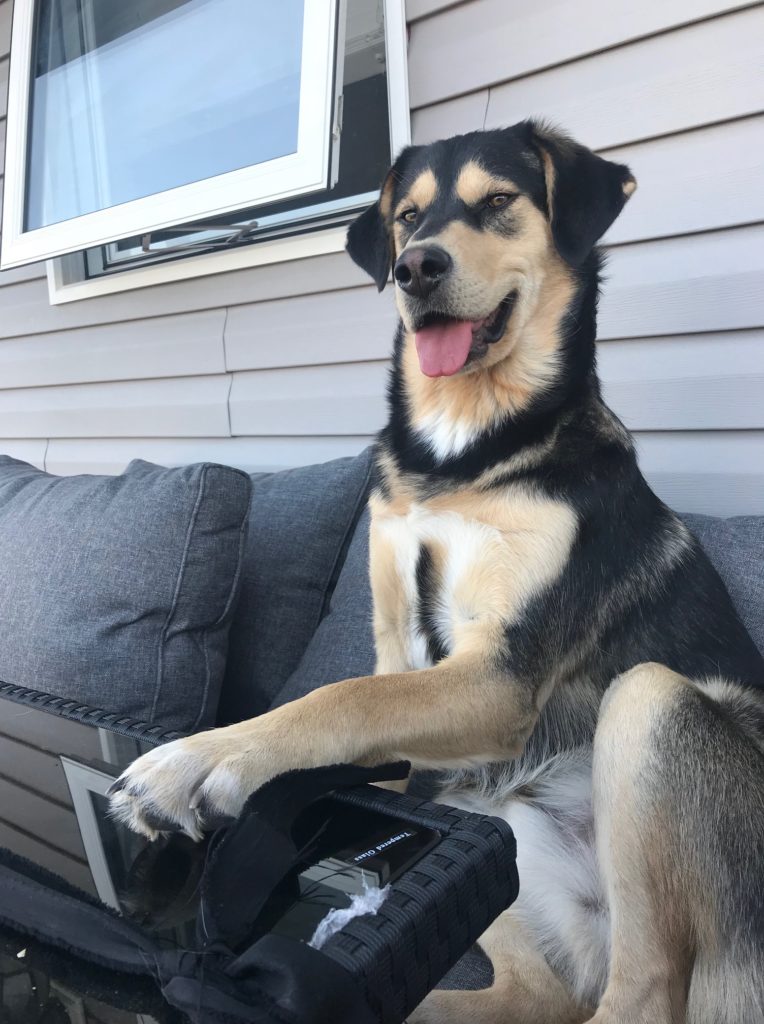 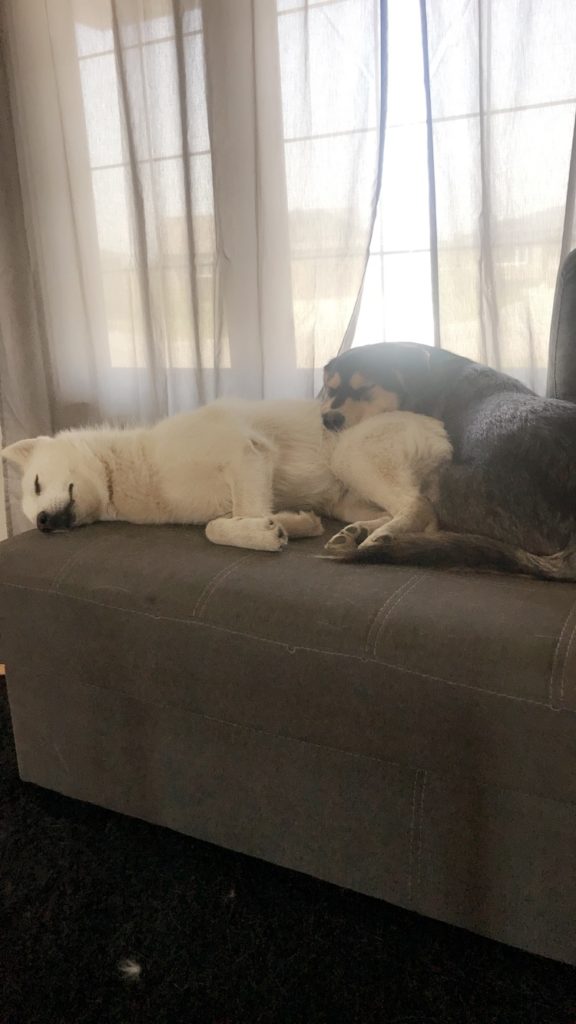 Indy and his twin sister Marion came to us as strays. Indy was returned once, through no fault of his own, but sometimes things work out exactly how they need to. Indy now lives with an amazing family, a new sister Tika (who he loves almost as much as Marion), a big back yard and more love than he’s ever known before. Good job, Indy! 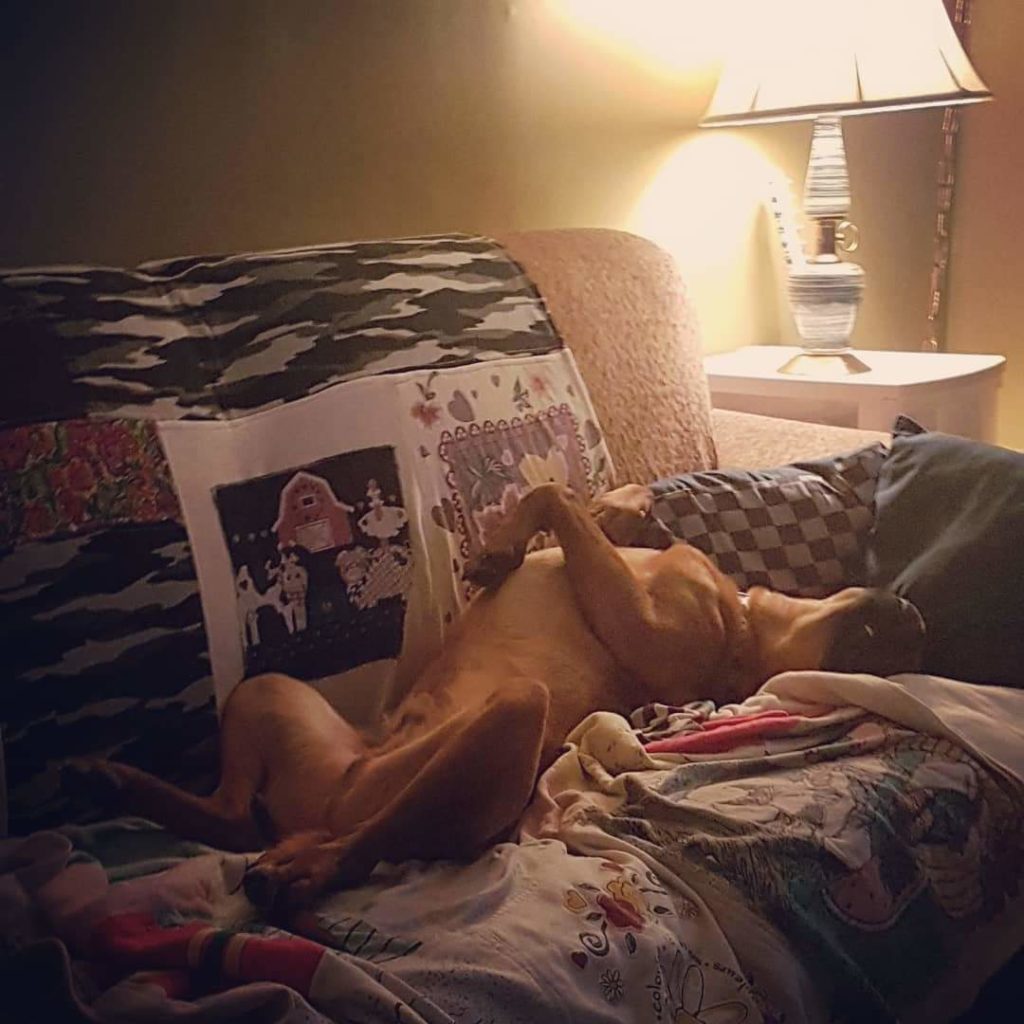 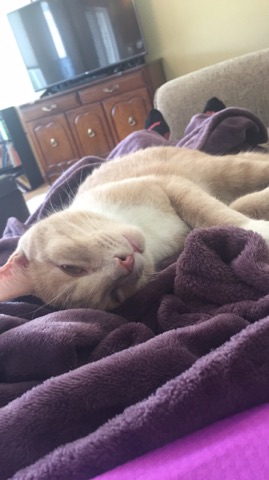 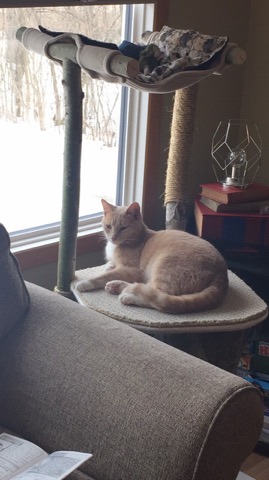 Dipper arrived at the shelter when he was 3 months old. Just shortly after his first birthday, Dipper went to his furever home! He now has a family and human brother to play with all day long. 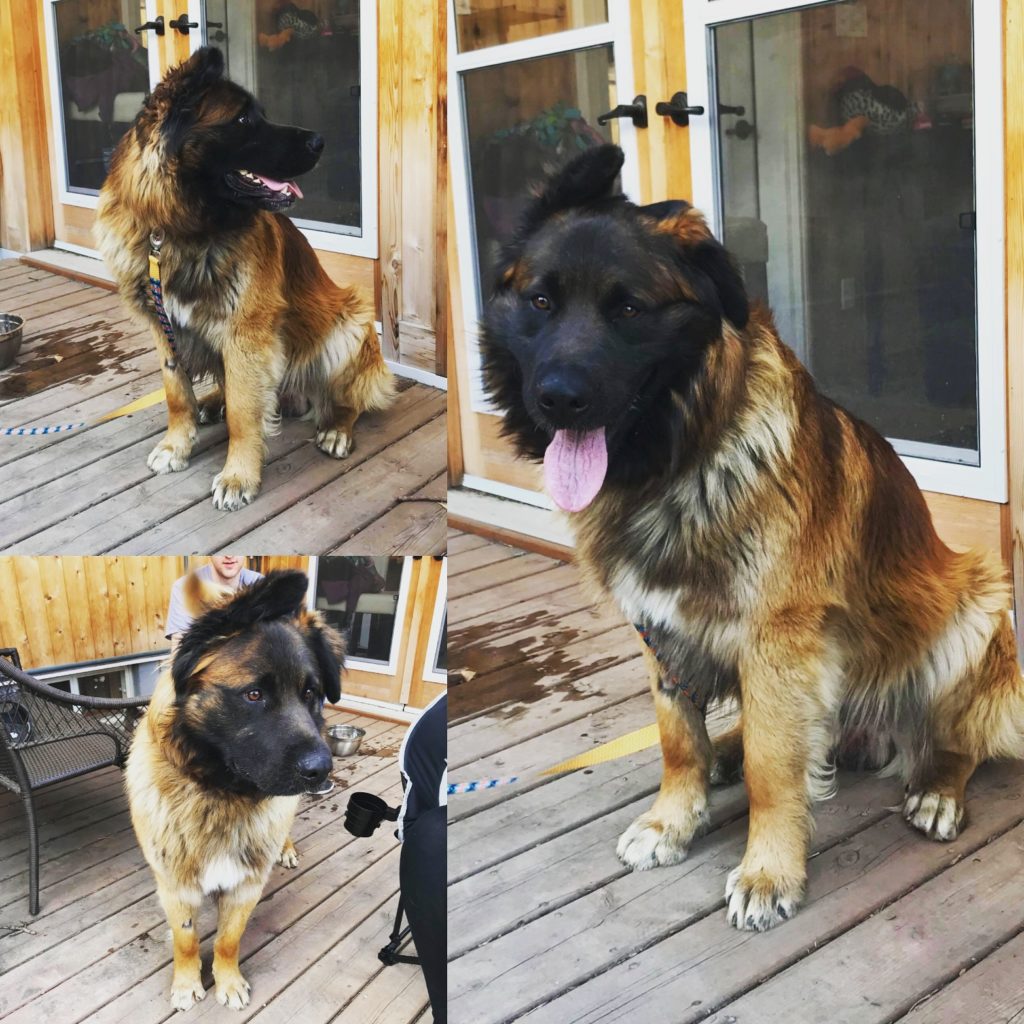 Leon was barely in the shelter for 24 hours when his new owner fell in love at first sight. As soon as he was vetted and assessed he was whisked off to his new life. Good job, Leo! 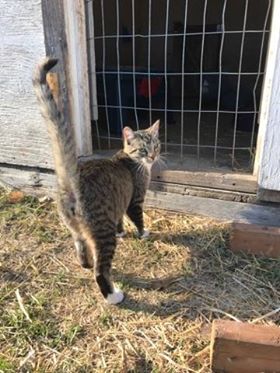 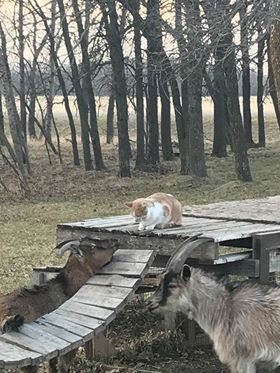 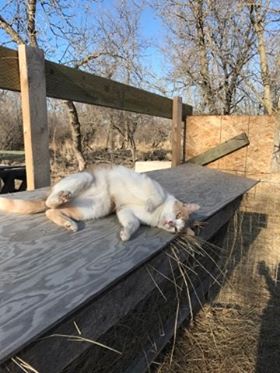 Peanut was in the shelter for 25 weeks, Egypt for 11. When we moved Egypt into Room 1, Peanut practically adopted her immediately (grooming, cuddling, playing with her all day).

We were thrilled when they were adopted together, living on a nice farm with goats to play with! 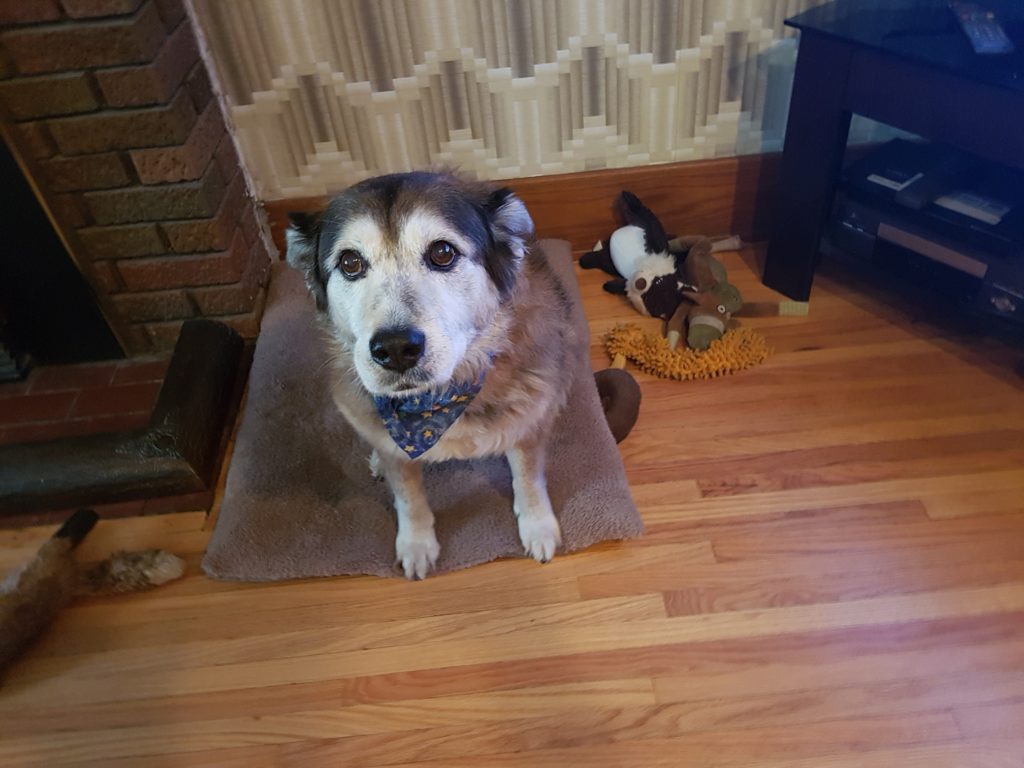 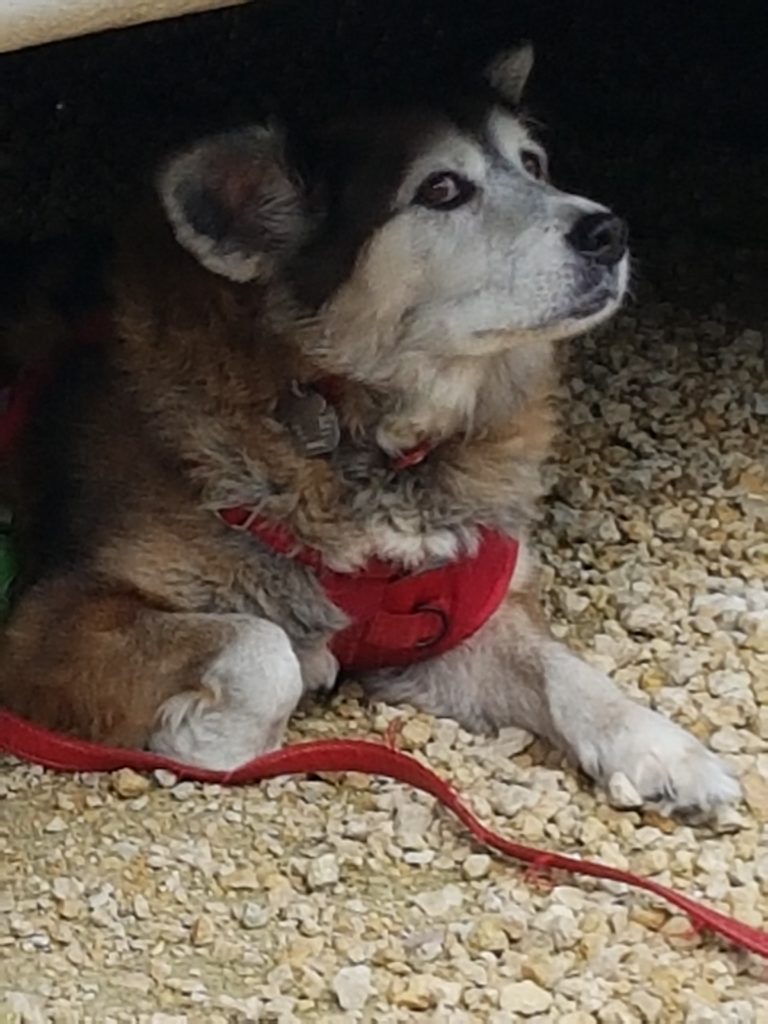 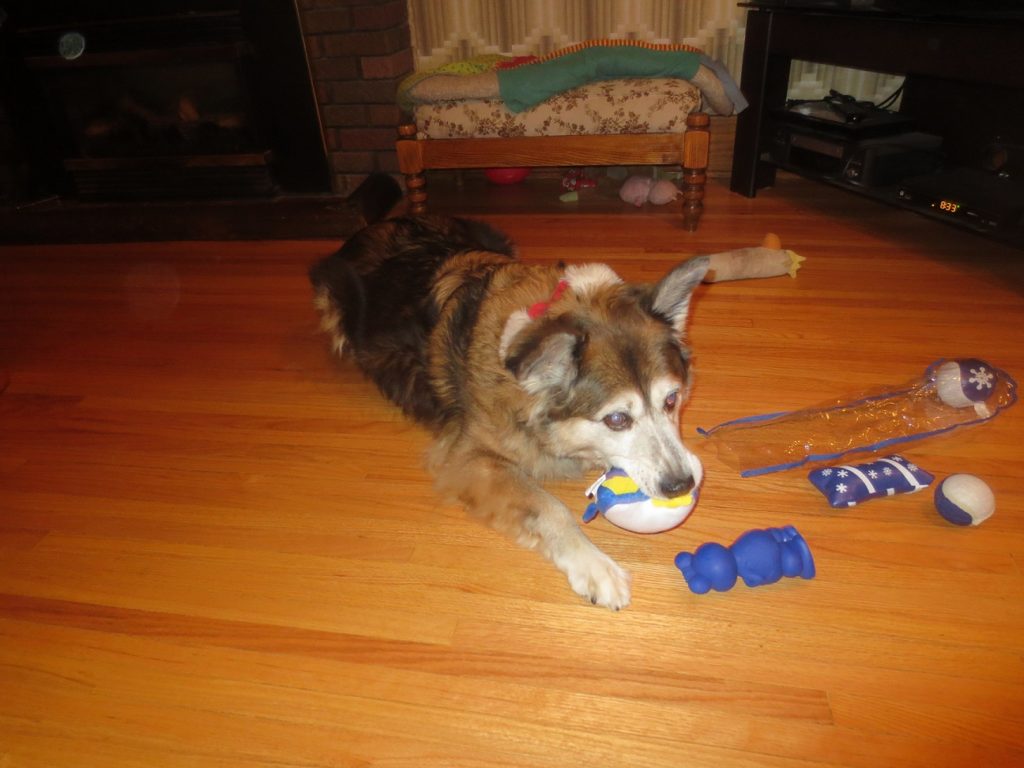 We adopted Coco, at 1 years old from the PVHS. It was in the old building. She jumped up right away and rolled over for a tummy rub.  our dog had just died .  We moved from Winnipeg to Morden for my Husband Eric to retire. He grew up in Morden. So we wanted another dog to be our companion. The first day we brought her home she jumped on the chesterfield and just cried. Wasn,t sure why so turned on the TV and she was fine. She is a very loving dog. She loves to play with her ball, catching it.  She loves camping too.  She now comes with us to Mesa, AZ for our winter vacation. I dont think she likes to fly but as soon as she sees us she is fine.  She loves to sit on our lap on the one chair she  is allowed on. She weighs 63 lbs.  She is spoiled. She sneezes for dog treats and seems to know when supper time is and lets us know.  We are so glad we gave her a second chance for love.
She also sings if I get her started
Joanne & Eric Thompson 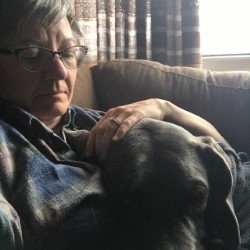 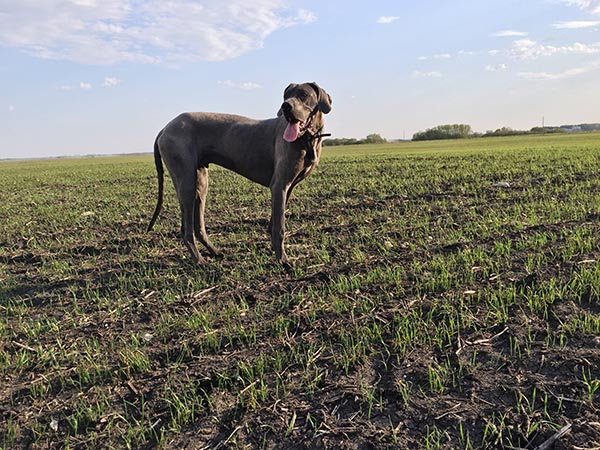 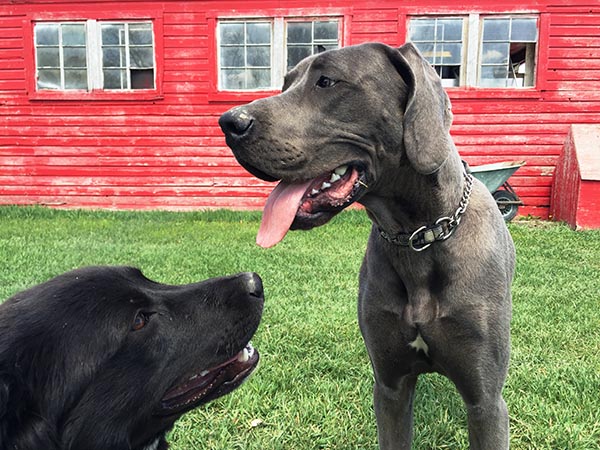 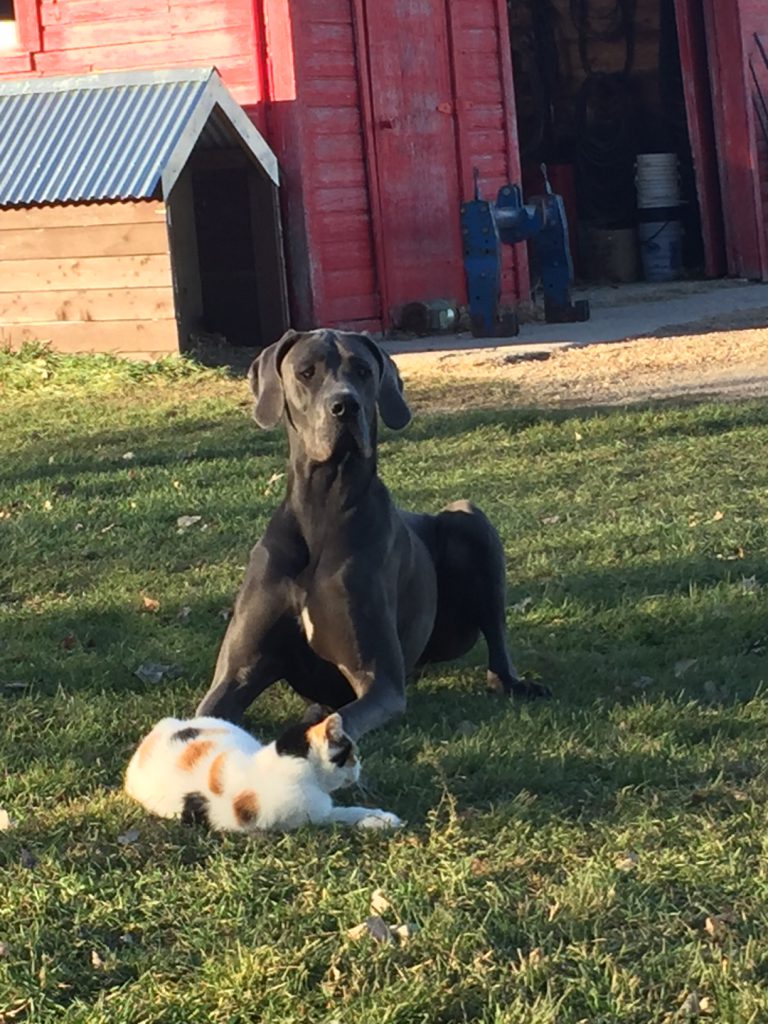 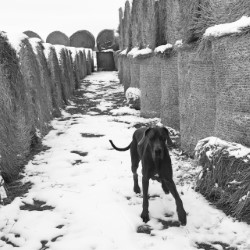 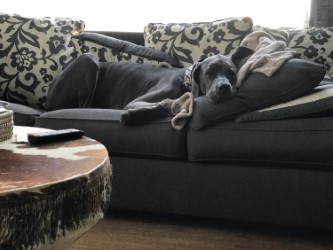 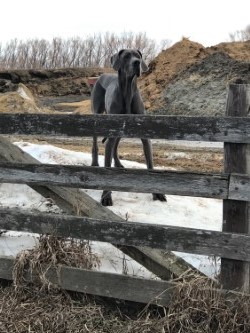 We adopted Gus (formerly “Roman”) April 2015. He was 7 months old when he joined our family. We had been looking to add a dog to our pack to be a dedicated companion to my husband on the farm. PVHS helped us by answering questions we had about his nature, temperament, and breed. They allowed us to spend time with him at the shelter and arranged for us to have him meet our other animals. We had not been looking specifically for a Great Dane but when we met him and we had done some research, we applied. He is a happy, gentle lovebug; a typical Great Dane. We had fallen in love with him but we had him meet the rest of our pack and they approved!

Gus is a gentle giant and we love him to bits. He is a companion for my husband during the day working around the farm yard. He loves his plays with Hiccup, our border collie mix. Evenings, he comes inside with us and retires like a prince to the couch. He likes to perch his back end on our lap (we call it the Dane sit), cuddles, belly rubs, and watching hockey play-offs.

He loves his outings into town to walk and meet people, especially kids. Because we adopted him from PVHS, many volunteers and community members got to know him. He enjoys seeing people, getting ear scratches and sharing slobbery kisses. We try to bring him into town as often as possible for walks down Stephen Street or plays at the off-leash dog park.

He is a beauty and a goofball and we are so lucky to have found him at PVHS. Thank you to PVHS for caring for him during his time there and for helping us add him to our family. 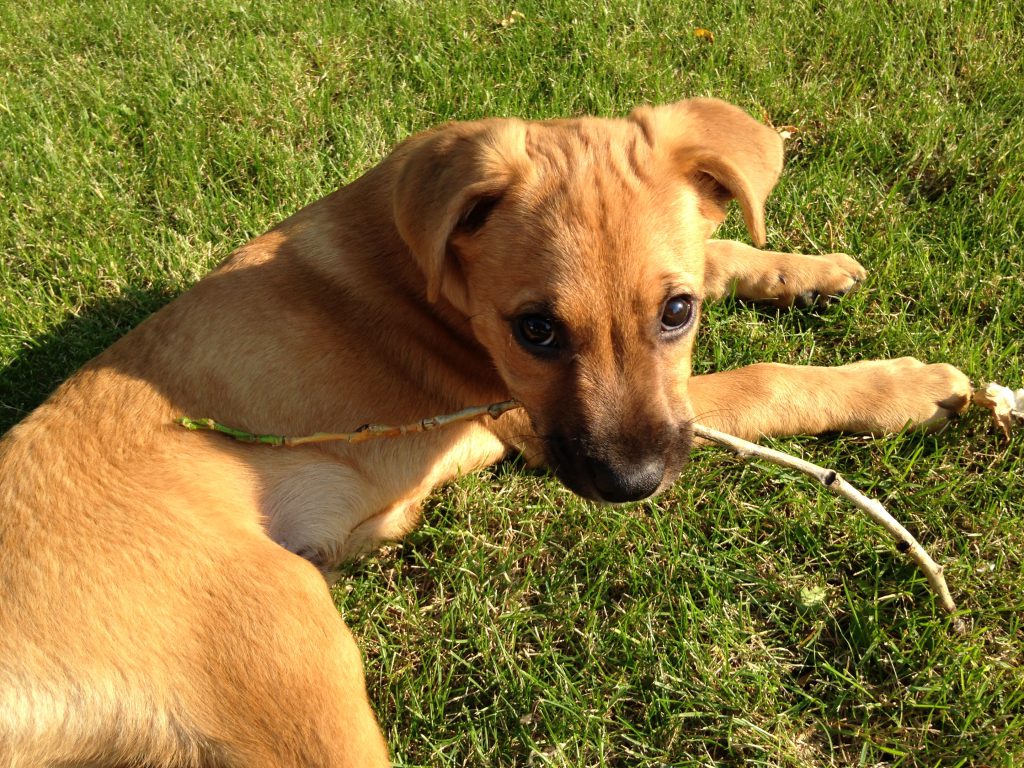 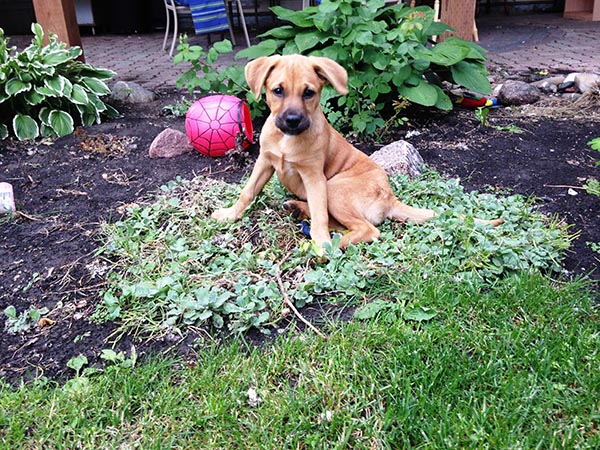 Floyd had a rough start to life. A good Samaritan saw him being thrown from a vehicle near Carman in the Spring of 2015 and stopped to help the little puppy. They decided to surrender him to PVHS when he needed more care than they could offer. Floyd went into foster care with a loving family until he was ready to be adopted out.

The Frost family already had a wonderful older dog named Finn and they wanted a companion for him as well as a playful pet for their three young boys to grow up with. They adopted Floyd and the adventure of a new puppy in the home began!

Floyd has been loved by the whole family and enjoys playing with his older brother Finn. He has a big backyard to play in and lots of toys and treats! He is an extremely energetic boy and goes on looong walks with him mom. Sometimes he even gets to go on their treadmill!

We’re so happy that what could have been a tragic end for this guy turned out to be a life where he’s loved and happy and well cared for!